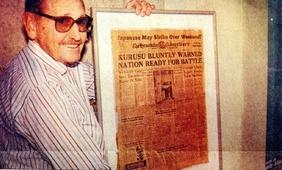 Caption: Paul Brown hold a copy of The Honolulu Advertiser showing the foreboding headline. Now hanging in a museum at Fishermen's Village in Punta Gorda, the paper is believed to be only one of two in existence. SPECIAL TO THE CHARLOTTE SUN VIA AP

U.S. Army Private Paul Brown managed to obtain a copy of the The Honolulu Advertiser just after they have been delivered — and before the front page was ripped off. When he inquired about it, he was told it was orders “from the top brass.”

Editor’s note: This article first appeared in the Charlotte Sun on Dec. 7, 2012.

On Sunday morning, Nov. 30, 1941, U.S. Army Private Paul Brown decided to slip out of his bed early at the Schofield Barracks Base Hospital on the island of Oahu, and head to the latrine.

Assigned to the 52nd Field Artillery Battalion, he had been involved in an accident, and, because of the severity of his injuries, he was confined to a wheelchair and wanted to clean up early to avoid being in the way of the other patients.

Brown, who moved to Miami after the war, then to Englewood before settling in Arcadia in the 1970s, heard a “commotion” at the front desk and went to investigate, according to a 1997 newspaper column he had written in the Arcadian. The daily newspaper, The Honolulu Advertiser, had just been delivered — but they were ripping the front page off all of them before they were distributed. When he inquired about it, he was told it was orders “from the top brass.”

But Brown managed to obtain a copy of the paper from a medic with the front page intact. The headline read: “Japanese May Strike Over Weekend.”

He quickly folded it and stuffed it into his pocket before anyone could notice. The next day, he mailed off the newspaper clipping to his parents — before the Army censors had a chance to intercept it. Because few had seen the front page, he felt no one would believe his story.

Less than a week later, Brown was talking to a fellow patient. As they chatted, both noticed a double rainbow over Kolekole Pass, referred to as the “gateway to Schofield Barracks.” The person told Brown that it was a bad omen.

He “just laughed it off,” he later wrote.

The following morning, Sunday, Dec. 7, 1941, Brown again headed to the latrine early. He was now out of his wheelchair, but still needed canes to walk around. At 7:55 a.m. local time, he heard “the drone of a plane.” To him, it sounded like it was going to crash, so he rushed outside. Brown knew Schofield Barracks was near Wheeler Field, so he looked in that direction.

To his horror, he watched a plane drop a bomb on one of the hangars and saw the “roof raise up several feet,” then saw it quickly drop down. Suddenly, fighter planes swooped out of the sky. Brown realized they were Japanese Mitsubishi Zeros by the Japanese flag, referred to as the “Meatball” by the G.I.s, painted on its side.

As the planes flew at extremely low levels — so low eyewitnesses later said they could see the faces of the Japanese pilots — one set its sights on Brown. The rounds from the plane’s 7.7 mm machine guns tore up the ground around him, spraying him with small pieces of concrete, but he miraculously missed getting hit. Years later, his wife, Betty, would remember him saying, “He could feel the heat from the bullets as they whizzed by him.”

Brown, who died in 2005, tried to tell people over the years what he had read, but to no avail. He finally gave up.

Then, in 1982, when he was going through his deceased mother’s valuables, he found the clipping in the letter he had mailed home that fateful November day more than 40 years earlier.

“His mother kept everything,” said Betty, Brown’s wife. “She was a packrat.”

Today, that same front page of the Honolulu Advertiser hangs in the Military Heritage Museum located in Fishermen’s Village in Punta Gorda. It is only one of two copies known to be in existence. The other is at a library in Honolulu

The Honolulu Advertiser, had just been delivered — but they were ripping the front page off all of them before they were distributed. When he inquired about it, he was told it was orders “from the top brass”. According to  military sources, our government subsequently managed to destroy almost all the evidence, including going into the Hawaii hospitals and ripping off the front page of this newspaper. However, private Paul Brown, seeing what was going on, reportedly managed to save his own front page of the Advertiser and hide it from the government. This is one of the very few known copies of that paper. It is supposedly hanging in the Punta Gorda Florida Military History Museum. At least it was, as of March of this year.
Historians would like people to believe that Pearl Harbor was a surprise attack, but it was well known in advance, and permitted to happen so that we could join the war.