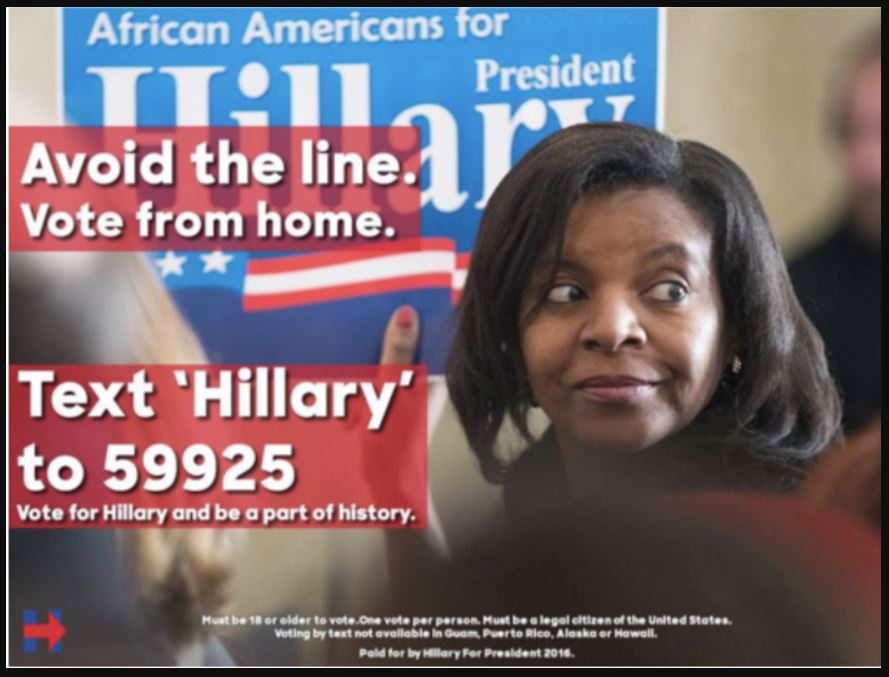 Biden’s Department of (Justice has charged a Trump voter who had 58,000 followers on twitter with election interference because he posted a meme in 2016 telling Democrats to vote for Hillary Clinton via text as a joke.

A Florida man was arrested this morning on charges of conspiring with others in advance of the 2016 U.S. Election to disseminate misinformation designed to deprive individuals of their constitutional right to vote.

Douglass Mackey, aka Ricky Vaughn, 31, of West Palm Beach, was charged by criminal complaint in the Eastern District of New York. He was taken into custody this morning in West Palm Beach and made his initial appearance before U.S. Magistrate Judge Bruce E. Reinhart of the Southern District of Florida.

“There is no place in public discourse for lies and misinformation to defraud citizens of their right to vote,” said Seth D. DuCharme, Acting U.S. Attorney for the Eastern District of New York. “With Mackey’s arrest, we serve notice that those who would subvert the democratic process in this manner cannot rely on the cloak of Internet anonymity to evade responsibility for their crimes. They will be investigated, caught and prosecuted to the full extent of the law.”

The complaint alleges that in 2016, Mackey established an audience on Twitter with approximately 58,000 followers. A February 2016 analysis by the MIT Media Lab ranked Mackey as the 107th most important influencer of the then-upcoming Election, ranking his account above outlets and individuals such as NBC News (#114), Stephen Colbert (#119) and Newt Gingrich (#141).

As alleged in the complaint, between September 2016 and November 2016, in the lead up to the Nov. 8, 2016, U.S. Presidential Election, Mackey conspired with others to use social media platforms, including Twitter, to disseminate fraudulent messages designed to encourage supporters of one of the presidential candidates (the “Candidate”) to “vote” via text message or social media, a legally invalid method of voting.

For example, on Nov. 1, 2016, Mackey allegedly tweeted an image that featured an African American woman standing in front of an “African Americans for [the Candidate]” sign. The image included the following text: “Avoid the Line. Vote from Home. Text ‘[Candidate’s first name]’ to 59925[.] Vote for [the Candidate] and be a part of history.” The fine print at the bottom of the image stated: “Must be 18 or older to vote. One vote per person. Must be a legal citizen of the United States. Voting by text not available in Guam, Puerto Rico, Alaska or Hawaii. Paid for by [Candidate] for President 2016.”