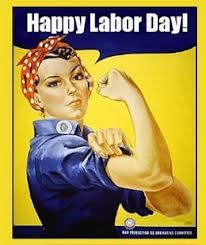 LABOR DAYTo appreciate it, one needs to know the history preceding it.At the time the United States was founded, most people were farmer or worked in trades, such as blacksmiths, cobblers, bakers, upholsterers, etc.

Then the Industrial Revolution occurred in the early 19th century with the harnessing of water and steam power.

This led to the creation of factories which could mass produce items inexpensively.

In America, most factories were in the Northern States.

As there originally was no Federal Income tax, the Federal Government was financed primarily from:

EXCISE TAXES on items like salt, tobacco, liquor; and

TARIFF TAXES on imports, making them more expensive so people would buy goods made in American factories.

The problem was the Tariff Taxes that helped the North hurt the South, as the South had no factories to protect.

At one point, nearly 90 percent of the Federal Budget came from Tariff Taxes collected at Southern Ports. This fueled animosity prior to the Civil War.

Textile manufacturing produced items like clothes, glass, dishes, and farm tools for a fraction of the previous costs.

Railroads now could take people safely and inexpensively across the entire nation opening up unprecedented mobility and opportunity.

Inventions and advances in manufacturing made more goods available at cheaper prices that America saw the fastest increase in the standard of living of any people in world history.

President Grover Cleveland dedicated the Statue of Liberty in 1886.

Immigrants arrived and they could get jobs working in factories where they learned the language and skills.

Get the book, The Interesting History of Income Tax

One such factory was that of George Pullman, who founded the Pullman Railroad Sleeping Car Company just outside of Chicago, Illinois.

George Pullman saw that workers needed a place to live, so he built them houses in a safe little village around the factory, deducting the rent from their paychecks.

Workers were paid in company ‘script’ which was accepted at the company-owned grocery stores.

It was thought to be a utopian workers’ community and worked well for over a decade.

There was a nationwide economic depression and orders for railroad sleeping cars declined.

In 1893, George Pullman had to make cuts in wages and lay off hundreds of employees, though rent and groceries stayed the same price.

The growing discontent was a seedbed for Karl Marx’s theory of class-struggle and the communist redistribution of wealth.

A young worker named Eugene V. Debs led a strike of workers in 1894.

There was rioting, pillaging, and burning of railroad cars.

It became a national issue when mail trains were interrupted.

President Grover Cleveland declared the strike a federal crime and deployed 12,000 troops to break the strike.

Since it was an election year, President Grover Cleveland thought it would improve his chances of getting re-elected if he appeased workers with a national LABOR DAY.’

He chose THE FIRST MONDAY IN SEPTEMBER.

President Grover Cleveland did not chose May 1st, as he did not want LABOR DAY to be in coordination with the Communist “International Workers Day.”

He also did not want LABOR DAY to be May 1st as this was the anniversary of the bloody Chicago’s Haymarket Riot, where rioters blew up a pipe bomb on May 1, 1886, killing 7 policemen and injured 60 others.

The statue dedicated to the police who died in the 1886 Haymarket Riot was blown up by on October 6, 1969, by Bill Ayers’ militant leftist group “Weatherman Underground” during their Days of Rage.

The statue was rebuilt, only to be blown up again by the Weatherman Underground on October 6, 1970.

With these unprecedented improvements in working conditions came an unintended consequence, namely “out-sourcing.”

These overseas factories, together with their cheaper labor, allowed companies based overseas to produce items for less, whereas in America, costs increased with:

Companies not supporting those politicians or parties were left at a financial disadvantage and had to go out of business or out of the country.

Squeeze the sponge and the water goes out.

Make it more expensive to manufacture in America and jobs will leave.

Bringing jobs back is as simply as allowing it to be more profitable for factories to be located here than there.

Get the book, THE INTERESTING HISTORY OF INCOME TAX

But building the political will is difficult.

Beginning in 1950, union membership among American workers shrank from 50 percent to less than 12 percent.

Instead of addressing the need to make it more economically advantageous for business to bring their jobs back to America, many unions have focused their efforts on simply increasing their membership by recruiting from other occupations, such as government, education, service and retail.

“I would like to call upon America to be more careful with its trust…and prevent those…because of short-sightedness and still others out of self-interest, from falsely using the struggle for peace and for social justice to lead you down a false road.

I call upon you: ordinary working men of America…do not let yourselves become weak.”