Jim Fetzer, The Russia Hoax Comes Apart at the Seams by James Fetzer 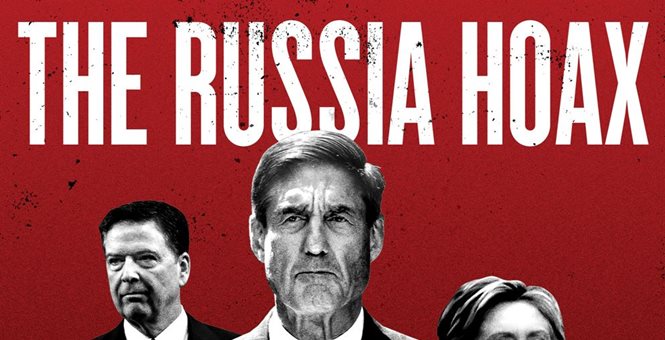 If you watch only one video this year, this is the one to watch. See how the DOJ/FBI was hijacked by Hillary Clinton and the DNC to sabotage Candidate Trump and subvert President Trump. It’s far worse than you thought. See how murder and politics intersect. Robert Mueller has a history of crime and corruption, including covering up 9/11, Sandy Hook and the Boston bombing. He even married into the CIA. The mainstream media has lied to us for two-and-a-half years–and continues to this day!. Can you handle the truth? This story boggles the mind!

The key players include Barack Obama, President of the United States; Loretta Lynch, Attorney General; James Comey, Director of the FBI; Sally Yates, Acting Attorney General; Andrew McCabe, Deputy Director of the FBI; and a cast of subordinates and collaborators in the most stunning conspiracy in American history, where former MI6 agent, Christopher Steele, who authored the so-called “Russian dossier”, has acknowledge to a UK court under oath that it was composed for payment by Hillary Clinton as “opposition research” for her campaign against him.

The crucial role of Barack Obama extends from wire-tapping conversations between the UN Secretary General and German Chancellor Angela Merkel to bugging the Chief of Statt of the UN High Commission for Refugees to the Director of the Rules Division of the World Trade Organization, stole sensitive diplomatic cables between Israeli PM Netanyahu and Italian PM Berlusconi and other world leaders, even US journalists who were doing stories he didn’t like.

Jerry Brown passed a motor/voter law in 2015 with automatic voter registration with driver’s license renewal, but in California, illegal aliens are allowed to obtain driver’s licenses; Obama went on Latino television to tell Latinos that, when they vote, they are citizens, trading on an equivocation between performing the function of a citizen by voting and having the right to perform that function; the polls were rigged, photos were shopped, to create the impression that Hillary had the election in the bag, but still lost the election over ending wars in the Middle East.

After her collapse at the 9/11 Memorial Service in 2016, they sent out a body double (the “Meg Ryan” double) and, a few days later, used another (the “Meryl Streep” double). They even used doubles during her debates with Bernie Sanders and with Donald Trump, because they were younger, thinner, more attracting and in much better health. Had the real Hillary shown up, the public would have been appalled. The mainstream media neglected the obvious different, where The New York Times even publish “Hillary’s in the House” featuring four different doubles.

The mainstream media ignored SHATTERED: Inside Hillary Clinton’s Doomed Campaign (2017), even though it explained that John Podesta and Robbie Mook had made up the Russian hacking meme within 24 hours of her concession speech, which was intended to distract public attention from her incompetent campaign; to divert from the contents of the Wikileaks revelations, which led directly to Pizzagate, where John Podesta appears to be Pedophile-in-Chief; and from her sale of 20% of US uranium reserves to Russia for a $145,000,000 “donation”.

Seth Rich, an IT guy for the DNC and a Bernie Sanders’ supporter, disillusioned with the sabotage of Bernie’s campaign, downloaded the files directly from the DNC server with the assistance of Kim Dotcom and then transferred them to Julian Assange by way of Craig Murray. As Veteran Intelligence Professionals for Sanity, including Bill Binney, have confirmed, it was doe at a rate too fast for distant Russian hacking and in the Eastern Time Zone. There was NO “Russian hacking”, but a insider’s leak, for which Seth Rich then paid with his life.

At one point, even the FBI acknowledged that the “Russian hacking” narrative was “bullshit”, but the media would have none of it and has run with the story for more than two-and-a-half years, where the public continues to be told that Trump is not a legitimate president because the Russians put him in office, when even Google’s CEO has testified to Congress that the total sum Russians spent on the election was $4,700 (four thousand, seven hundred dollars), peanuts in a billion-dollar contest where companies like Google spend that much on an executive lunch.

Even though the DNC refused to allow the FBI to inspect its servers (which ought to have raised serious doubts about the entire story from the beginning), the charade continued, with the claim that the “Guccifer 2.0” files had been identified as having Russian sources because of “electronic fingerprints”; but it turns out that the CIA has the ability to manufacture those “identifiers” to create the impression of any source it chooses, where no proof has emerged of the existence of authentic evidence of Russian hacking–because no such hacking occurred!

THE BEAT GOES ON

Even when the House Intelligence Committee chaired by Rep. Devan Nunes (R-CA) released its detailed, thorough and comprehensive report, which found that the “Russian dossier” was a political document as (corrupt) opposition research financed by Hillary Clinton’s campaign, that the FISA Court had not been informed of its origins and character, that Obama’s FBI had already opened a counter-terrorist investigation of the Trump campaign (which had yielded nothing to justify a FISA warrant), and much more, the media sough to debunk it.

The Obama administration devised and promoted “The Smith-Mundt Modernization Act of 2012”, which nullified the Smith-Mundt Act of 1948 to allow the production and dissemination of propaganda within the United States by the government, which that statute had precluded. It affords a legal framework for staged productions, such as the Sandy Hook child massacre, the Boston marathon bombing, and the Charlottesville charade, which have been staged to promote the political agenda of the Democratic Party by manipulating the minds of Americans.

THE ROLE OF ROBERT J. MUELLER

Although the mainstream media has lionized Robert J. Mueller as though he were a knight in shining armor on a white horse battling for truth and justice and the American way, the facts appears to be quite the opposite. He was brought in as Director of the FBI prior to 9/11, where he covered up the role of the CIA, the Neocons and the Mossad. He did nothing to expose the elaborate ruse known as “Sandy Hook” and was in office during the fake Boston bombing, where amputee “crisis actors” debuted. He may also be behind the murder of the mobster, Whitey Bulger.

You might say Mueller married into the CIA. His wife, Anne Cabell Standish, and he were wed three years after the assassination of JFK. Her grandfather, Charles Cabell, was Deputy Director of the CIA and removed from office, along with Richard Bissell and (subsequently) Allan Dulles, for misleading JFK about the Bay of Pigs. His brother, Earle, was Mayor of Dallas at the time–and was recently revealed to have joined the CIA in 1956. Richard Bissell, moreover,  was Mueller’s own great uncle. Maybe Allan Dulles was present at Mueller’s wedding?

THE CRUCIAL ROLE OF THE MEDIA

As Mike Adams, “The Health Ranger”, has observed, the mainstream media has been indispensable to covering up (what appears to be) the greatest political scandal in the history of the United States.The major media are consolidated and under the influence of the Council on Foreign Relations and Israel, where 100 top executives of NBC, of CNN and of The New York Times are all dual US/Israeli citizens. As even Noam Chomsky has observed, US elections are under foreign interference, but by Israel, not Russia. We have neither free elections or a free press.

The CIA began infiltrating the media in the 1950s. By 1975, William Colby, then its Director, testified to Congress that the agency owned everyone of any significance in the media. That dominance has been threatened by the emergence of the Internet, which has led to massive crackdowns by the Social Media Giants, who no longer serve as a platform for freedom of speech but are vigorously censoring conservative voices and conspiracy research. If it means anything to be an American, it’s the right to criticize your government without retaliation.

To appreciate the blatancy of the bias exercised by the mainstream media, Donald Trump has been attacked as a traitor to the United States for wanting to improve relations with Russia. But no such charges or concerns have been raised in the past with Bill Clinton, George W. Bush, Chuck Schumer, Hillary Clinton or Barack Obama, who all cordially engaged in conversations with Vladimir Putin. Someone doesn’t want the US to enjoy better relations with Russia. The Russia Hoax was fabricated to promote a political agenda. Don’t let yourself be played.

Jim Fetzer, a forme Marine Corops officer, is McKnight Professor Emeritus on the Duluth Campus of the University of Minnesota and, with Mike Palecek, co-founder of moonrockbooks.com.