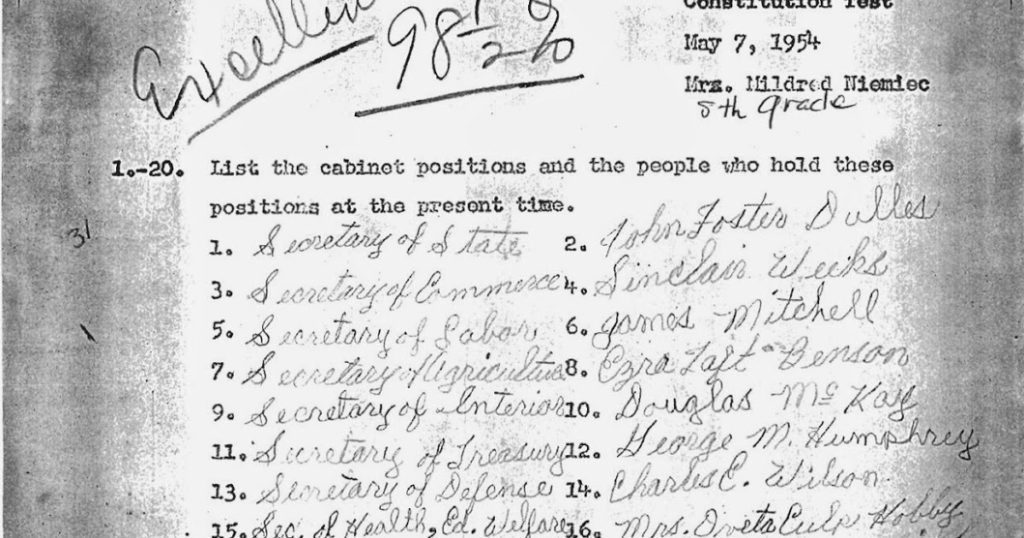 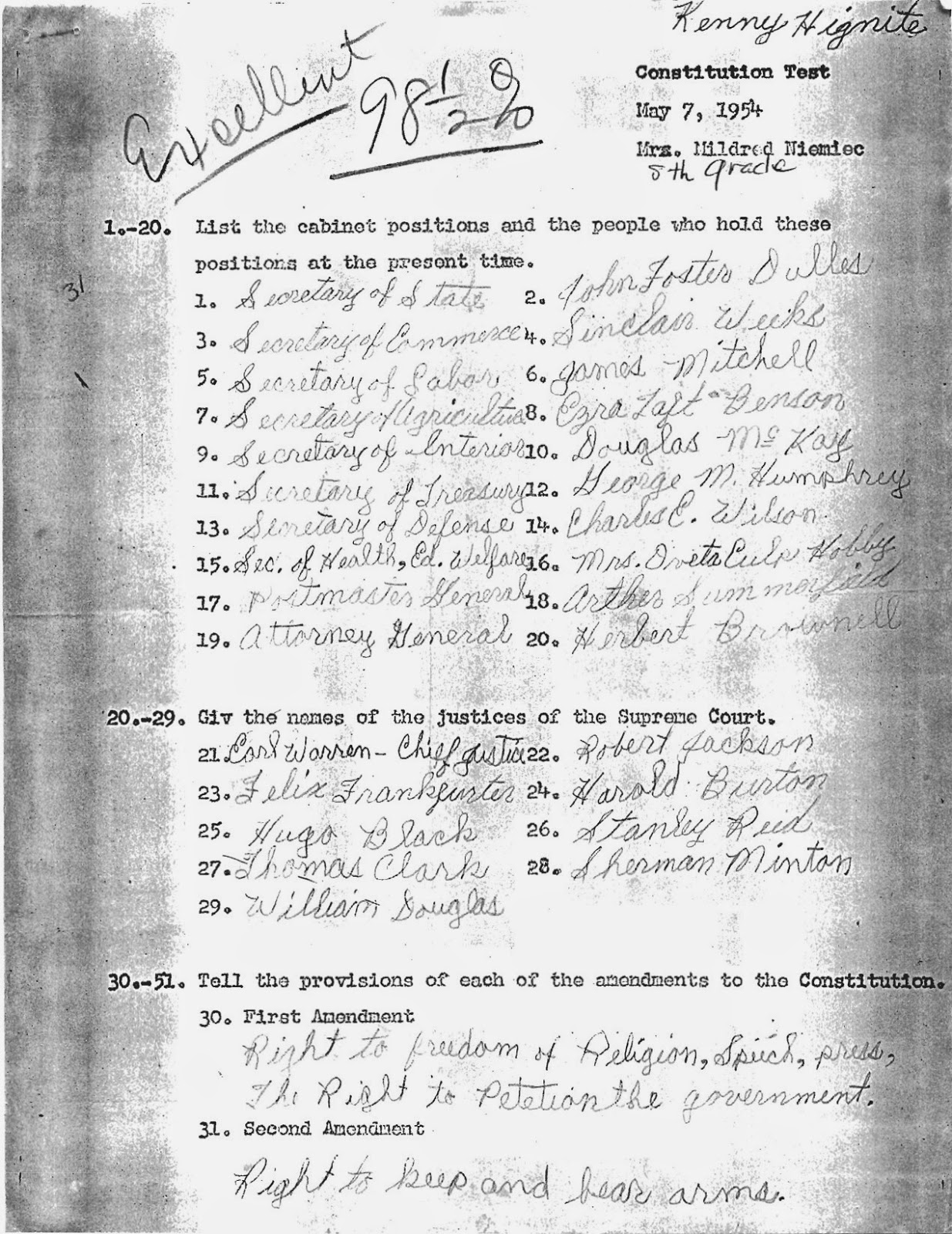 Here is the fascinating story behind Kenny Hignite’s 1954 American Constitution 8th grade test: how the Kenny Hignite test came to light and how Kenny’s test has had at least 150,000 hits at AmericanDeception.com, and how Kenny has now become very, very famous.

While I was speaking at an education conference in California in the early 1990s, I was approached by a youngish couple who handed me a very valuable piece of research: the actual copy of an Eighth Grade history test on the U.S. Constitution,  given in a public school in central California in the mid 1950s. There were so many people surrounding me at the time the test package was delivered to me that I did not have time to open it up. I never even properly thanked them for what would subsequently become probably the most important piece of research ever obtained related to the difficulty level of a public school history test administered in the USA in 1954. Note that 1954 was eleven years prior to the first real, carved-in-stone, massively funded federal intrusion into local education which took place under the Elementary and Secondary Eduction Act of 1965 (a huge step towards the deliberate dumbing down of america).

After settling into my seat on my return flight to Maine, I opened the package and took a look at what they had given me. The student’s name, Kenny Hignite, was handwritten at the top of page 1, followed by his grade: 98-1/2+ “Excellent,” and the teacher’s name: “Miss  Mildred Niemiec.” I was blown away by Kenny’s total knowledge of the many facets/guarantees of the U.S. Constitution and Bill of Rights, and how our government works. He named all the Supreme Court Justices, the Secretaries of Treasury, State, Defense, etc., and the role of the three branches of government. He explained the provisions of each of the 22 Amendments to the Constitution. He explained in great detail the Bill of Rights, and much more. There is no way that I, Charlotte, could ever, even in the year 2014, receive a high mark equal to that of Kenny Hignite!!

Now, here is the kicker:

After the test proved to be a real “hit” with people going to AmericanDeception.com, to the extent that this particular post was receiving huge numbers of hits from all over the world (150,000 at this writing) — more hits than even the U.S.-Soviet Education Agreements and the Transcript of the 1954 Investigation of the Tax-exempt Foundations (!), I decided to try to find Kenny. I spent much effort over a period of several years trying to locate him.

One day, after I had done a show with Alex Jones, during which I mentioned the Kenny Hignite test,  a fellow from California called me to say he had heard me on the Alex Jones Show. He told me that he knew Kenny Hignite well, that he was a great guy, a Master plumber, and that the two of them snowmobiled together! (He even invited me snowmobiling next time I go to California!)

This caller gave me Kenny’s telephone number, so I phoned him and we got to know one another. I then I informed Kenny that he was becoming certainly one of the most well-known persons in the world due to all the hits at the website! He was taken aback and pleased, I guess. He told me something funny: he said Miss Mildred Niemiec, his history teacher, was in her early twenties at that time. She was, in his words to the effect, “a cute chick” and really tough on her students, not allowing them to get away with forgotten homework, late papers, bad language, or anything. She made great demands on her students and they respected her, and followed through on her demands.

Additional Post of Interest:  “DOWN WITH THE FINNISH CURRICULUM” folks, and soak up the brilliant advice from The People LLC, writers for the 3D Research Group, on the newest scam/fad “The Finnish Model.”