Call In Line: 844-769-2944
Welcome to The Power Hour Website. This week’s guests include former NSA intelligence official William Binney, author Terry Beatley to discuss lies told by Planned Parenthood, health expert Robert Redfern will discuss inflammation and how to fight it, Dr. Patrick Porter will discuss healing through sound, Wayne Elliott will be joining for heart month with tips on keeping your heart healthy, Ron Salley will share how his “Miracle Skin” formula can be used for countless skin conditions, CPA Alan Meyers will discuss why the FED is private, and Power Hour favorite Daniel Estulin will discuss geopolitical affairs and current news. To call the show live with questions or comments: 844-769-2944. Please support The Power Hour show by visiting www.thepowermall.com 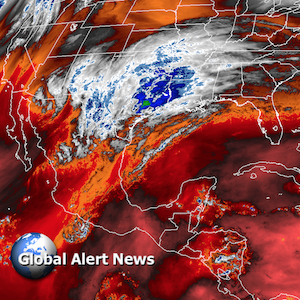 The human race continues to hit the accelerator as we head over the edge of the abyss. The weather-makers are fully utilizing their resources to engineer yet another winter weather event over North America, “Winter Storm Diego”. Are environmental protection provisions being augmented? Or are they being completely gutted? The list of recent actions in that arena is beyond shocking. Are the recent wave of dire environmental reports accurate? Many are already starving around the globe, is it possible first world populations could soon face food shortages as well? The latest installment of Global Alert News is below.

How can we maintain solace, a proper perspective and a correct compass heading, even as collapse looms on the horizon? If we can look ourselves in the mirror and know that we are doing our absolute best to stand against the darkening horizon, then we are on the right path. Make your voice heard in the battle to sound the alarm, every day matters at this late hour.
DW

Geoengineering Watch wishes to express our most sincere gratitude to Maciej Kocialkowski for his tireless work toward raising awareness on the critical issue of climate engineering. The geoengineering awareness booth in the photos below was set up at the Historical Train Depot farmers market in Punta Gorda, Florida (12/8/18). Maciej has also translated GeoengineeringWatch.org flyers into Polish and personally distributed them in his homeland of Poland.

This week’s GeoengineeringWatch.org outreach booth is at the Earl Warren Showgrounds, Santa Barbara, California, and is shown below. My most sincere and continuing gratitude to the Gem Faire exhibition organizers for facilitating and setting up this very effective booth in every week’s Gem Faire location. The schedule for upcoming Gem Faire events is HERE. A geoengineeringwatch.org booth will be at all events, thanks to the steadfast support of Gem Faire.